On April 15th, at its Annual Wings Dinner, the Rockcliffe Flying Club presented 2015 Safety Award to John Ferguson, Chief Pilot of CASARA Ontario Zone 12, based at the Rockcliffe Airport (CYRO).

Under the CASARA Outreach Program, John has presented the How to be a Cooperative Target seminar to several enthusiastic aviation groups in eastern Ontario. He has elicited praise for the excellence of his presentations and promotion of safety.

John is an anchor member of Zone 12, having served as Training and Operations officer for many years. As chief pilot, his focus is to make safety the primary preoccupation of all CASARA crew members. 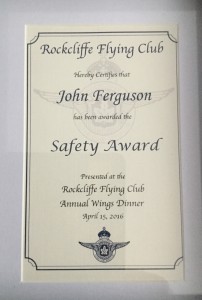